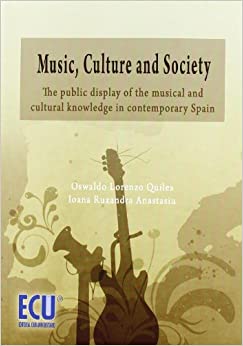 Music, Culture and Society: The public display of the musical and cultural knowledge in contemporary spain

The current work is a descriptive, systematic and deep study of the popularization of the current musical knowledge in the Spanish culture and society from the end of the Civil War of 1936 up to the beginning of our century. This study focuses on our country’s recent historical perspective on the phenomenon of construction and popularization of the musical knowledge and culture in the contemporary society, a context in which the mass media have gradually become a constant presence in the daily life of the Spanish people; without the mass media we could not understand the complex sonorous space making up the musical personal preferences of most spanish citizens. Previous historical and cultural events will help us understand the particular vision and evaluation of the music that has prevailed in our society in the past few years, illustrating the latent relationships between music, culture and the mass media as an informal way of transmitting the musical knowledge to the people, of sharing it with them.